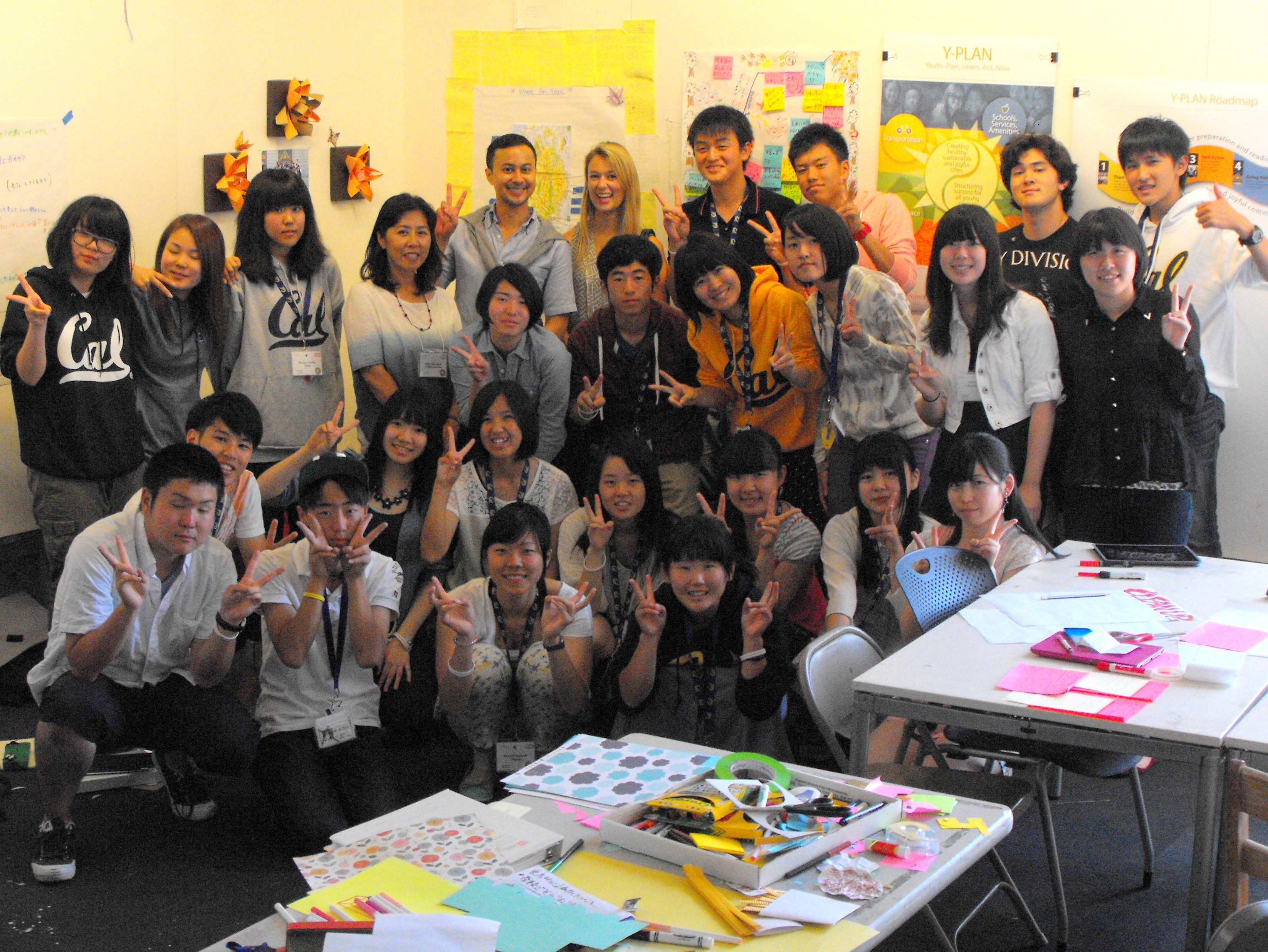 “How can you expect us to come up with solutions for revitalizing our community when we just lost everything?” This question floored me. It was posed by a member of the first cohort of high school students of the Tomodachi Softbank Leadership program, who traveled to UC Berkeley from Japan to partake in the Y-PLAN Leadership studio. These students had recently experienced the unimaginable. The Great East Japanese Tsunami and Earthquake devastated their hometowns, and the losses - of their homes, family members, friends and schoolmates - were fresh in their consciousness.  Understandably, the idea of assuming a leadership role was out of their comprehension.

How could I compassionately and effectively transform these students from a place of feeling like victims of a tragedy to becoming agents of change for themselves and their community? As a Y-PLAN instructor, I faced an intense situation unlike anything I’ve faced before. I struggled deeply, especially as I got to know the students better. I couldn’t help but get emotionally involved with their stories of hardship and often incomprehensible circumstances.

As we approach the ninth year of the Tomodachi program, I still look back on that first year and reflect on what ultimately resulted in a transformative experience not only for my students, but for me as an instructor.

What moment empowered those students to come out of their personal struggles and assume leadership role in their community?  Were there specific experiences that helped students see themselves as leaders?

What was true in 2002 about the Y-PLAN methodology and process still holds true today.

As a core part of the Y-PLAN curriculum, students are invited to come up with community development and revitalization proposals for another community in need of social or economic development solutions.  Students are presented with real life civic issues requiring research, analysis and deep thought. The client for that particular year was the City of Berkeley, which asked the scholars for their input on how to inject more vibrancy into its downtown area.

I saw a major shift in my students as they embarked on their field research. They observed a significant homeless population, gated children’s parks that faced safety concerns, and streetscape problems spanning from litter to issues of drug problems and crime impacting neighborhoods. In that moment, students were transported out of their daily struggles to the difficulties of a new community. They were challenged to come up with ideas to elevate the local situation.

Their demeanor changed as they immersed themselves both individually and as a team to come up with creative solutions for the City of Berkeley.  The withdrawn students became engaged and lively. This opportunity to help, and the feeling of being able to “give” despite their current situation, was empowering for them, as I learned. They experienced one of the main urban planning principles of the “community of practice” - everyone helps and contributes their expertise for the overall community benefit. This sense of empowerment was heightened by the opportunity of “going public” by presenting their proposals to a panel of civic and community decision-makers.  For the students, this was the first time they ever had the chance to present their ideas to civic leaders and be heard.  Overcoming the fear and nervousness associated with this part of the Y-PLAN process was very emotional for the students. From my vantage point, this was the pinnacle of their transformation. They accomplished something beyond their expectations.

What the students recommended to the City of Berkeley was to “Find Your Heart” - to determine and visibly showcase the city’s core values in their public spaces. It was touching to see how students began applying the same recommendation to their personal action plans, reflecting back of what was important to them in their environment pre-tsunami and imagining what changes they would like to see in both themselves and their hometowns. The seeds of leadership, inherent to the students but watered and fed by the Y-PLAN process, began to surface and take shape.

The student who asked “How can you expect us to come up with the solutions for revitalizing our community when we lost everything?” eventually became a group leader, guiding the discussion for the proposal for Berkeley. At our graduation ceremony, he was the one who could not let go of me during our final embrace.

This is one of the many powerful moments I reflect on when thinking about the impact of Y-PLAN and the Tomodachi Softbank Leadership program.

What remains at the core of Y-PLAN’s strength is its methodology.  Grounded in years of educational research, the process and the tools developed, guided thoughtfully by instructors, have the power to transform the young people to become agents of change for society and equally inspires adults to value the voices and insights of the younger generation to help advance our communities.

Having subsequently been involved with Y-PLAN Africa and Y-PLAN Elementary, I can confidently say Y-PLAN will continue to endure and change our global community landscape to be healthier, more equitable, diverse, sustainable and joyful.  Happy 20th Anniversary, Y-PLAN.