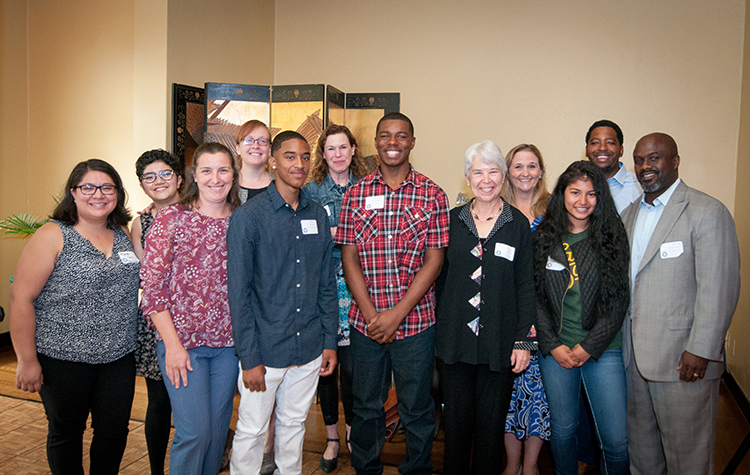 On Friday, September 29th, Y-PLAN received special recognition from Chancellor Christ in the Chancellor’s Community Leaders Breakfast. Along with Y-PLAN and BART staff, AAMA Director Jerome Gourdine and Skyline High School teacher Jamal Muhammad, two of AAMA’s kings attended the event and spoke of their experience during the Y-PLAN process last semester and the their internship with BART over the summer. Last spring, in partnership with BART, 100 AAMA kings worked with Y-PLAN mentors to answer and propose solutions to BART’s question “How can we better connect Coliseum station to the community it serves?” Throughout the semester the kings toured BART stations, met with BART representatives, and brainstormed solutions. Their hard work led to a presentation in Oakland City Hall where they would present their findings to BART staff, City and Community officials, as well as the Mayor of Oakland Libby Schaaf. The kings’ proposals varied wonderfully from building parklets for children to play while they wait for their train, to wifi and charging stations throughout the stations and trains, as well as a mural that would commemorate the kings who have died in the Oakland community. After the presentations in City Hall, BART decided to hire seven kings to be summer interns and work on making their idea of painting a mural a reality. During the Chancellor’s Breakfast photos of the kings’ projects and presentations played over the projector, along with all the other organizations that were getting recognized. When it was Y-PLAN’s turn to go up to the podium and describe the work that we did last semester everyone in attendance from out group got up and stood behind the speakers. Deborah McKoy started the speeches by describing what Y-PLAN is and how we came about to having a partnership with AAMA and BART.

After Deb spoke, Jerome Gourdine, the director of AAMA, spoke next. He started his speech with a moment of silence to acknowledge the four kings who passed away last semester. All of these kings were involved in the project one way or another but were not able to see it through to the end because their lives were cut way too short. Although I was standing behind Jerome Gourdine, I looked out to the audience and noticed that a few people were wiping their eyes after the moment of silence. It made me think back to last semester when all of the mentors were in the Y-PLAN class here in UC Berkeley and Deb told us that one of the kings in one of our classes had been shot and killed. I remember the feeling of loss and of disbelief when we were faced with a reality that these kings have to deal with daily. I cannot imagine what that is like. When the moment of silence ended Gourdine said that one of the kings that passed away was really looking forward to see the end of the project. Even though he was not able to be there his classmates made sure that his memory, and the memory of the other kings, would be recognized in the mural they proposed to BART.

Next to the podium were two of the kings who worked on the project, Makale Bradley and Hezekiah Pemberton, both of whom worked in the internship BART created this summer for the Y-PLAN AAMA students. They talked about their experience working with Y-PLAN and BART. They said one of the things they learned was how to communicate with adults in a professional setting. They were really charismatic and had the audience laughing. After the program ended they were approached by many of the people who were in attendance. They were asked to take pictures and were handed countless business cards, all with people offering them resources if they ever need them.

Mr. Muhammad spoke after the kings. As a teacher during the Y-PLAN process he was able to see the progress the students were making firsthand. He talked about how throughout the course of a semester the kings were able to come up with some awesome ideas. His class came up with the idea of having better lighting throughout the BART station to increase safety. They also presented the idea of painting a mural in Coliseum station, one of his kings even drew an idea for a mural.

Gourdine ended the speeches by telling the audience that if they wanted to be good teachers for the kings the most important thing to do is to love them and to make sure that they are empowered to determine their own destiny. Going through the Y-PLAN process and being able to see one of their proposals become a reality has been a way that the kings have been able to change their community. The kings have lived in Oakland for years, they know the community better than most people and they observe and come up with solutions that are not yet filtered through an adult brain. This is to say that their solutions and proposals are ambitious and incredibly creative, they are not held back by self doubt, skepticism, pessimism, or by wanting to please their superiors, they were unapologetic in their proposals and told BART what needed to be done in order to ensure that they continue to attract new customers and retain the old ones. The mural they proposed is a step to achieving this goal. The mural is set to open in Coliseum station this fall.

To read more about this project and the others that were recognized at the Chancellor's Breakfast click here.