One of the most important components of the Y-PLAN process is the Site Visit and Neighborhood Walk. Earlier this year, Y-PLAN site visits were in full force with at least one happening every week. One of our first field trips in February was the Skyline High School, Green Academy field trip in Oakland, CA. The students in Skyline are participating in a statewide project to design school facilities to be more resilient, protecting people from the effects of climate change. 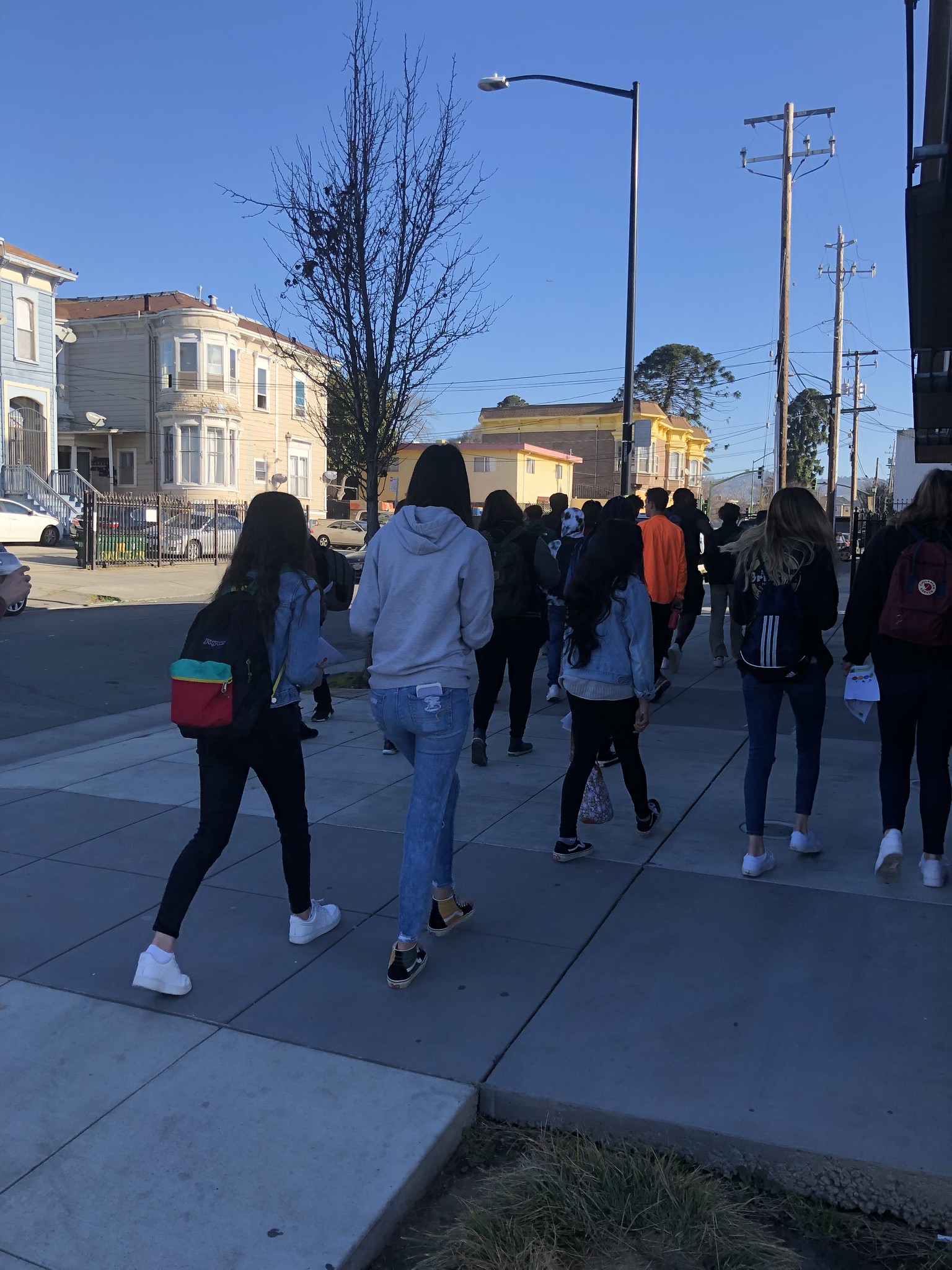 The field trip started in Clinton Commons, a Platinum LEED-certified affordable housing development. We met with Carolyn Brookhart, a property manager from Resources for Community Development, the organization that built and runs Clinton Commons. Carolyn and the on-site apartment manager let us into the building and gave us a tour of the common areas. They told us about how every part of the building was built to have a purpose, in accordance with the LEED Certification.

Before Carolyn arrived, the students were identifying the bioswales outside Clinton Commons - they already knew about the design features of sustainable buildings. On the tour, they learned about other facets of creating a resilient community. One of the important takeaways from the tour at Clinton Commons was that the building is designed to facilitate interaction between neighbors. One of the features is having the apartment units facing each other across a common courtyard.  In addition, Clinton Commons offers a community center with a kitchen that can be used by residents to hold events. This community center also serves as a gathering space for the Clinton Commons community, including an after school program and a monthly dinner. The students really loved the community aspect of the building.

As one student shared, “It’s nice here [in Clinton Commons] because you see your neighbors. People in regular houses get lonely because they just go straight into their [homes].”

Next, we took a short walk to a neighboring park, Clinton Square, where we asked students to look around the neighborhood and think about other things that make a community sustainable. We discussed the importance of local businesses, as well as creating green spaces for everyone to use. Students noticed that a lot of homeless folks live in the park, so we encouraged them to think about how homeless people are especially vulnerable to the effects of climate change and think about ways infrastructure can protect them. 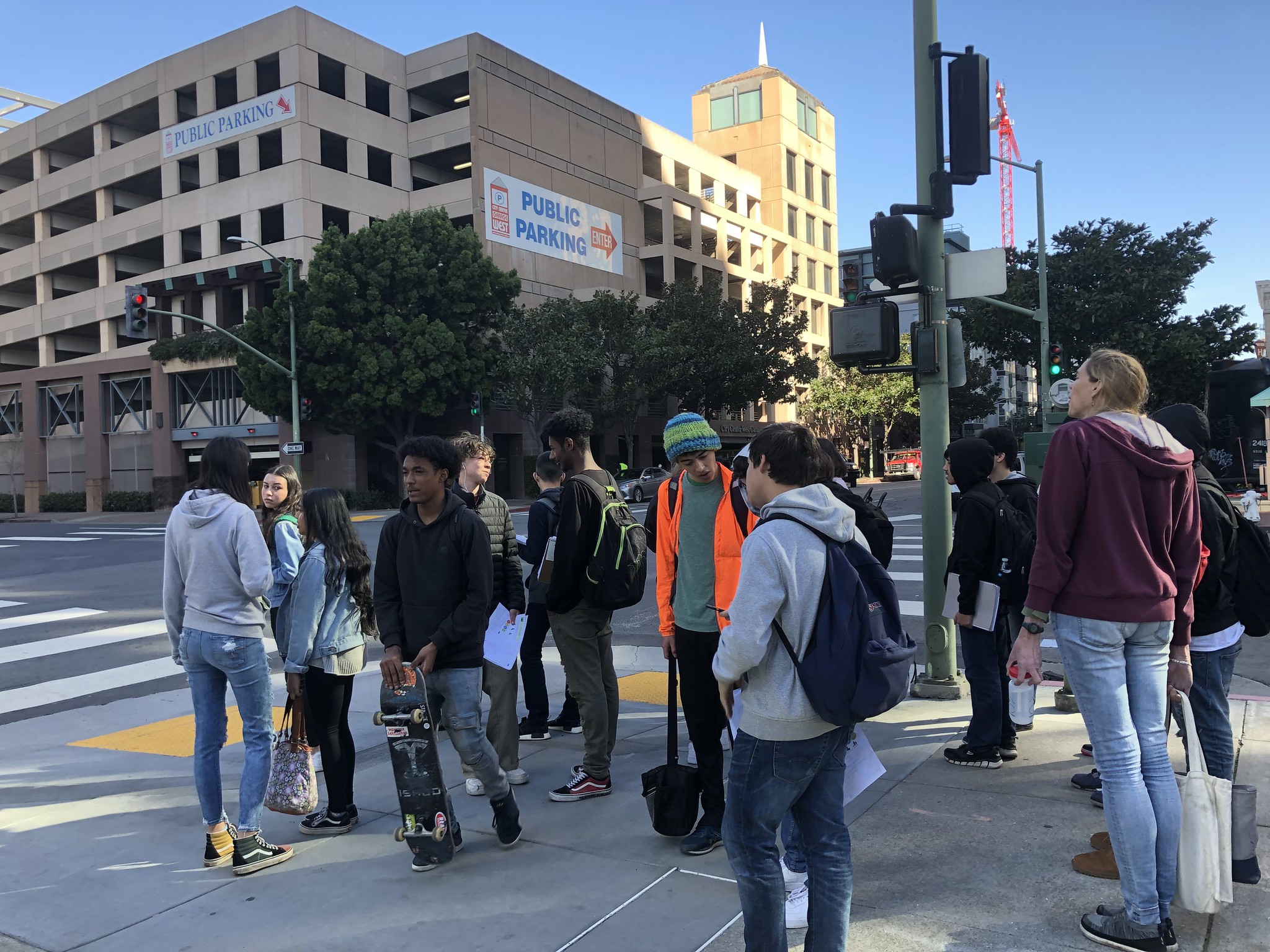 Our next stop in the tour was the Oakland City Center. Students grabbed lunch at nearby restaurants and after eating, we all regrouped to learn about Resilience Hubs. The group got a chance to hear from NorCal Resilience Network Founder and Director, Susan Silber. She spoke to us about the components that go into building a Resilience Hub: regenerative ecological features, disaster preparedness and response, and building community. The students thought about how the Oakland City Center could be a Resilience Hub for the community and what their school could do to become a resilience hub as well.

Finally, we went to 601 Oakland City Center, a LEED Gold-certified office building. The students discussed the features that make 601 a green building and which of those they could imagine their school having, from their observation of it from the outside. The students again thought the community aspect was important. They felt that students need to feel respected in school to become stewards of it. There seemed to be the dual feeling of wanting their school to have aesthetically pleasing features that were also environmentally friendly, as well as having concerns that students would not take care of the improved infrastructure.

One of the students said that he was worried students would vandalize the school with graffiti, and that although graffitti is a cool art, students tend to do it in places they shouldn’t. He then started to brainstorm and said that a way to fix that would be to have a designated wall where students could draw whatever they wanted. This would build up the community aspect of a resilience hub.

similar worries - they wanted their school facilities to improve and become more climate resilient, but they were worried that students would not be able to take care of them. This thought is still interesting to me, and it is one that I hear a lot in other public schools in low-income areas; but to that I ask, how come the ability of students to take care of school facilities is not brought into question in rich neighborhoods? When pressed further, the Green Academy students again said that respect is important -  students need to feel respected in their school.

This field trip enabled students to see example buildings built with environmental resilience in mind, as well as showing students how a building can function as  an asset to community resiliency. The students now have the task of imagining how Oakland school facilities can become more resilient and serve as a hub for the school community to possibly shelter in the event of an environmental or climate catastrophe.