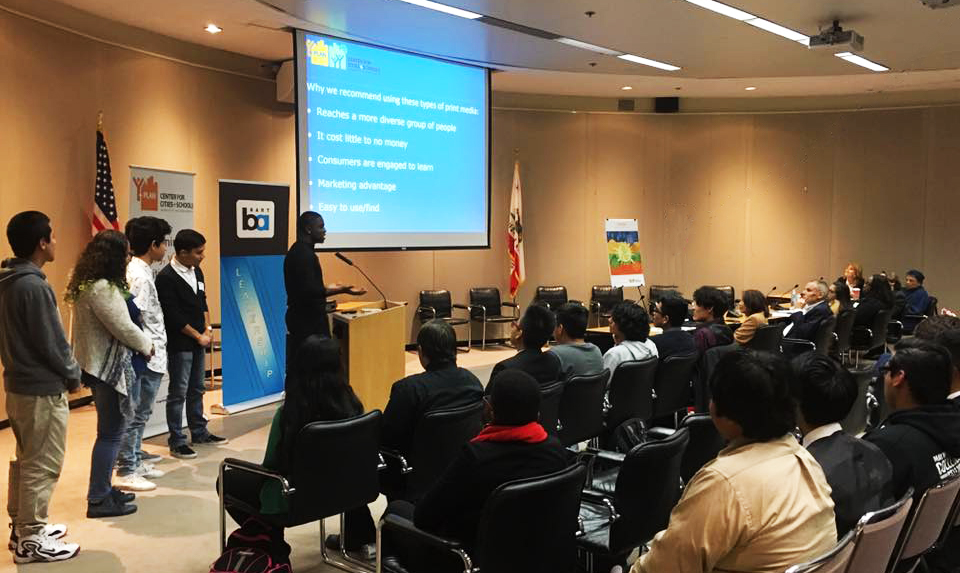 During the Fall semester of 2016, Dr. LaRue Moore’s senior classes in the IT Academy at Kennedy High School in Richmond, California participated in a new project-based partnership between Y-PLAN and Bay Area Rapid Transit (BART).  The project, facilitated through the UC Berkeley Center for Cities + Schools, provided an opportunity for students to visit BART and provide well-researched ideas to BART’s Human Resources Department. Almost one-third of BART’S workforce will retire in the next decade.  Kennedy students used their technological skills to provide recommendations focused on improving youth outreach and access to BART careers in order to meet this challenge. The semester-long project included a field trip to BART and ended with an event hosted at their headquarters where students presented their findings to the General Manager and other key Executive staff members.

The project officially launched in September 2016 at a training event hosted by CC+S.  There, the managers of the BART Human Resources Department were able to learn about the Y-PLAN process and start planning out project dates with the Richmond Coordinator.  The Coordinator also began meeting with Dr. Moore to finalize dates in-class visit dates and the Urban Inspiration Tour.

The Richmond Coordinator visited the Kennedy students to present the project question, provide a brief history of transit in the Bay Area, and to connect students to the Y-PLAN curriculum.  The students got to know each other  and figured out their strengths with Y-PLAN activities such as “Human Bingo” and “What I Bring to the Table”.  Next, the students were visited by BART Human Resources staff members, who provided resources and information on career pathways within BART.  A representative from the Laney College Career Pathways program also visited and provided information for students on technical career preparation courses at Laney.

Following the visit from BART Human Resources, the students took a field trip using BART to get to its headquarters in Downtown Oakland.  The event, hosted by the BART Human Resources staff, featured a tour of the highly secure main control room, a walkthrough of the Lake Merritt station, a tour of the Oakland Machine shop, two career panels featuring over 20 BART employees and their powerful stories, and a delicious lunch.  It was a truly spectacular day, and everyone left feeling much more knowledgeable and connected to BART as an agency.

After visiting  BART headquarters, it was time for students to dive into their groups and tackle the project question.  The question, “How can BART better use technology to get more people excited about careers in the transit industry?” was divided into four different parts, and included a youth-focused jobs interest survey.  Students chose whether to develop and administer the survey, provide recommendations on website improvements, use web-apps to outreach for jobs, create an outreach plan for people with limited access to the internet, or creatively display BART career pathways.  The survey results showed that youth overwhelmingly use social media to learn about and apply for jobs, and that most are not aware of the multitude of job opportunities within BART.  Students who made website improvement recommendations suggested that BART make it easier to find and apply for jobs through the homepage, and to increase the font size and languages represented.  The web-apps group came up with some creative ideas for Instagram, YouTube, SnapChat and Facebook pages to appeal to youth while also giving them a better idea of what jobs and careers are available.  Students also came up with many appealing outreach ideas for folks who have limited internet access, including producing stickers for children and having staff wear ‘now-hiring’ t-shirts at the stations.  Finally, the students who focused on sharing career pathways knowledge created an exceptional graphic using the BART map outline to show positive outcomes of having a career at BART.

After about a month of working hard on their projects in the classroom, student ideas were formatted to be a part of a larger PowerPoint presentation.  The final presentation was given in the beginning of December to key Executive staff members at BART.  Students presented in their groups and were given time to answer and respond to questions and critical feedback from the judges.  Overall, the panelists were excited about and responded well to student ideas, although some key details were called to attention, especially the cost of some of the proposals.  About 20 youth attended the final presentation, which was a great showing considering it was an after school trip from Richmond to Oakland on public transportation.

Following the culminating event, a smaller group of students were invited to present a summarized presentation to all BART managers at their quarterly management meeting at the BART board room in Downtown Oakland.  The students were introduced by the General Manager and had a chance to show all of the managers the productive results of collaborating with youth through Y-PLAN.  It was a great way to finish a busy and sometimes hectic project season, and the Kennedy IT Academy Juniors will have plenty of options for projects to work on with new BART departments in the Spring.