Y-PLAN Mentor Series #4: The Kings Make Their Proposal A Reality

During the Spring 2017 semester, students from Skyline High School and Oakland High School’s African American Male Achievement Initiative had the opportunity to propose ways that BART could improve the connection of the Oakland Coliseum BART station to the surrounding community. Students presented their proposals from replacing armed police officers with locally-respected “community protectors” to improving station lighting for safety to designing teen-friendly community centers at City Hall on the evening of April 17th to a packed Chambers including the BART General Manager and the Mayor of Oakland. These proposals were not just creative, but extremely powerful. 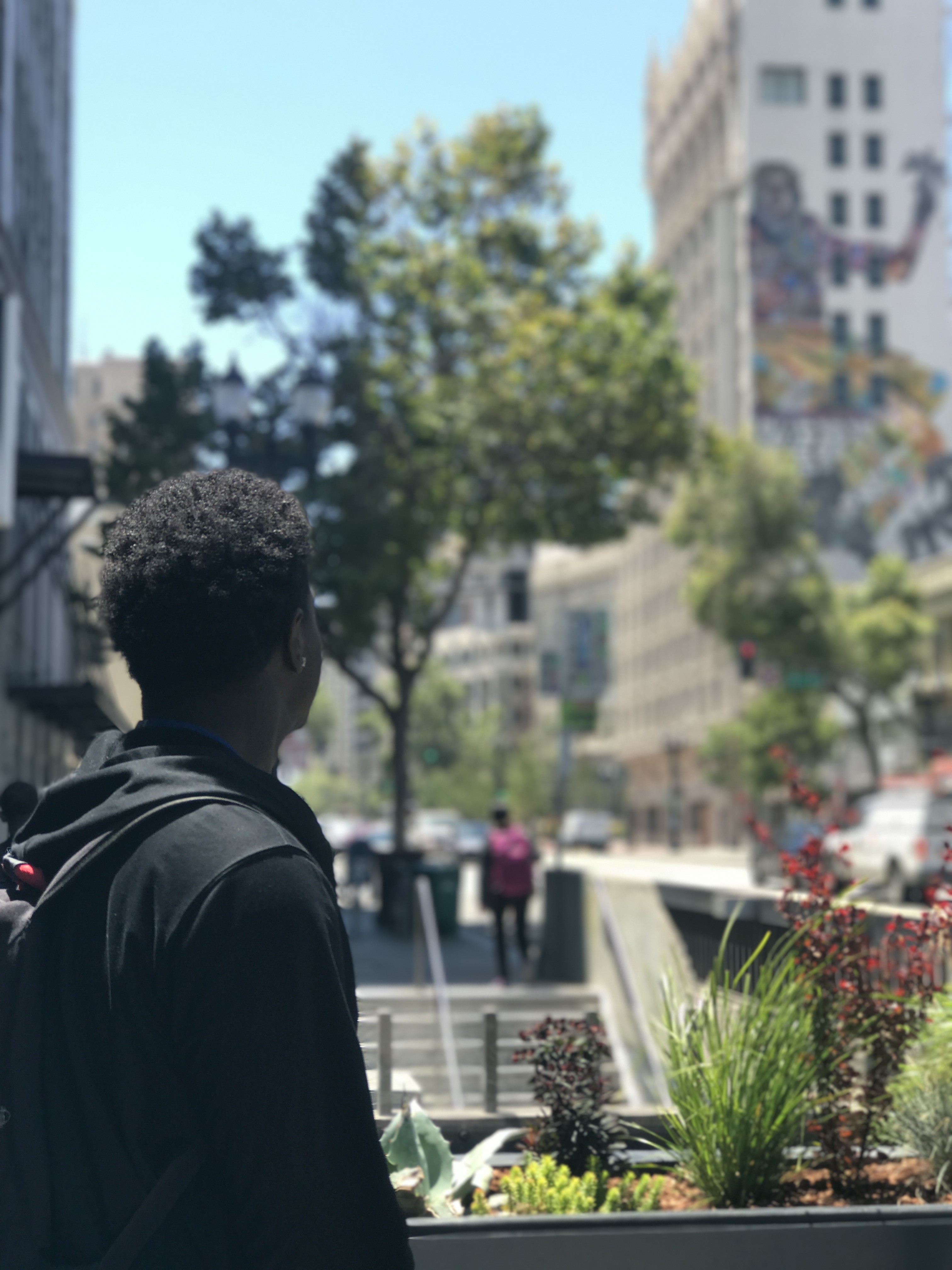 Following the Y-PLAN end of the year events in Oakland, BART hired seven students from AAMA Y-PLAN classes for stipended 5-week summer internships to implement one of these proposals: a community mural campaign. Under the direction of Jennifer Easton and Alicia Trost, BART’s Directors of Arts and Communications, respectively, AAMA Y-PLAN interns developed a theme, distributed a call for artists, and made their selections for the Oakland Coliseum BART Muralist during the month of July.

The first few weeks focused on brainstorming, community-based research and inspiration tours. Students developed general themes they wanted to explore more deeply later in the summer. Some of the themes included Oakland's history, Oakland heroes and envisioning a future Oakland aligned with their experiences and community. As interns prepared to visit the site to select the mural location, students also prepared a survey they would use to connect with BART riders at the Oakland Coliseum Station. These questions included asking community members to prioritize themes, to consider the potential impact of the mural on the Coliseum station, and to share other aspects of BART they would like to change. In addition to preparing questions, students role played on how to approach community members, given that some might be workers getting home from a long day or people rushing to their nextactivity. Although they successfully surveyed 40 people in less than one hour, interns expressed the challenges and highlights of talking to strangers.

“I didn’t like getting rejected but I was taking a risk trying something new.” - Solomon Bland, Oakland High Senior, shared as the team reflected on their community outreach portion of their site visit.

During their site visit, students also had the opportunity to research and select the final locations for their mural. As they toured the site and observed patterns of traffic within the station, they decided that the tunnel near the parking station would be best fit for their mural project.

When the interns returned to the BART headquarters for their regular internship meetings, they analyzed the data they collected during the survey. The results showed that community members also wanted to showcase Oakland’s history, since majority of the riders utilizing the Coliseum BART station were Oakland residents. Throughout their brainstorming and charrette process, interns were also asked to outline the crucial qualities for muralist selection. By analyzing their survey results and drawing from their experiences during the Y-PLAN project in the spring semester, they were able to point out characteristics they wanted to see in their ideal artist. Even as they listed these characteristics, students were simultaneously producing and distributing a Call to Artists to generate interest from professionals who would be able to translate the interns designs into a full-sized mural worthy of representing their visions.

In addition to analyzing surveys, students reviewed historical data about Oakland Coliseum BART station and participated in an Inspiration Tour where they visited 10-15 murals in Oakland and San Francisco’s Mission District. The top characteristics that students addressed as important from the murals they saw included having a lot of color, one impactful image and an opportunity for the audience to engage with it. During the tour, students were able to see the work of different muralists and different styles. Through the guided tour, students also had the opportunity to learn more about San Francisco, a city that many of them had never visited, despite its proximity to Oakland. 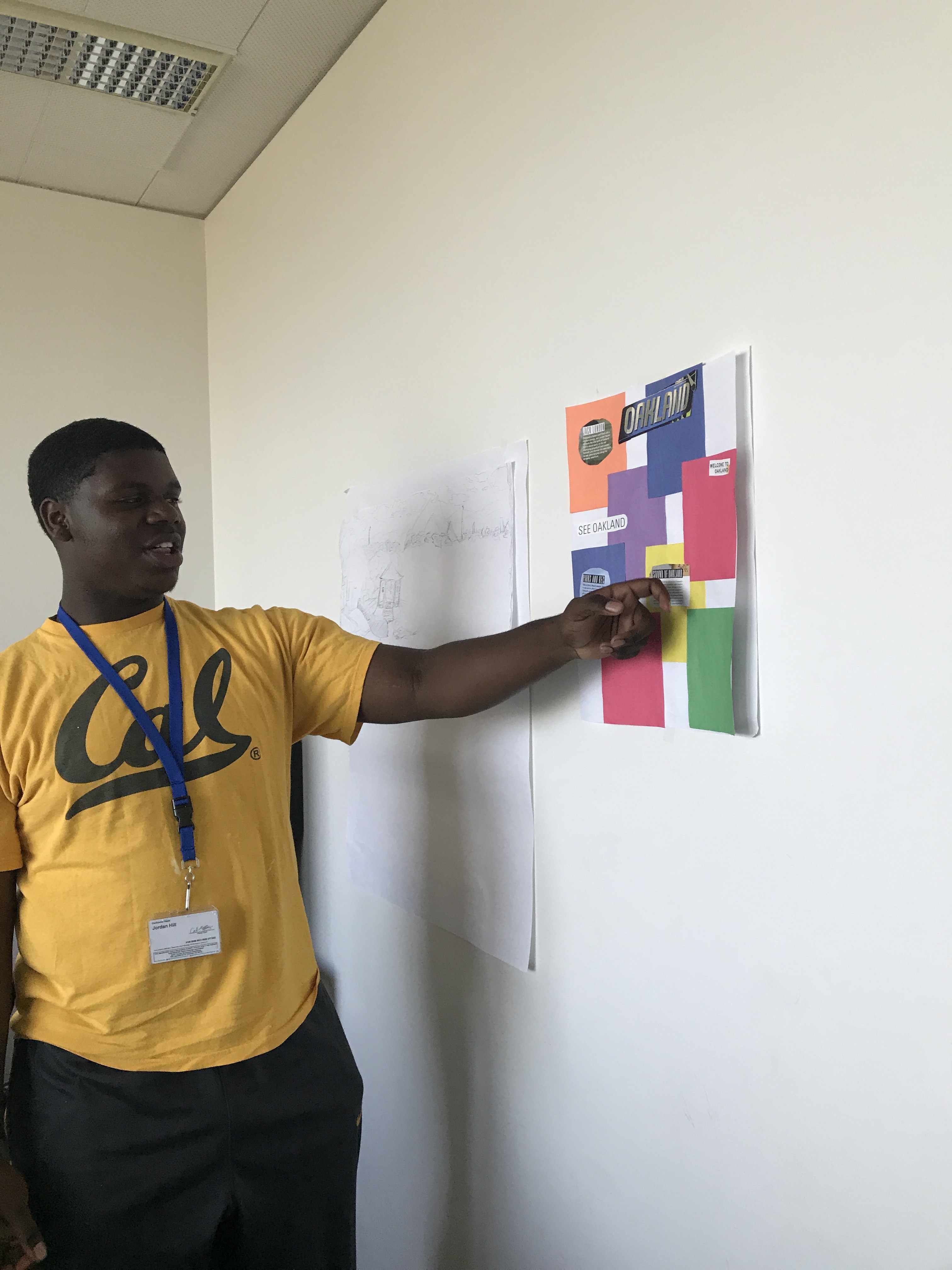 After bringing together all the experiences from the semester and internship, students developed both an individual and collective prototype for what they wanted the mural to look like. Students had to abstractly represent their own representation of history of Oakland and underlying values they wanted portrayed: diversity and youth, love and loss, ultimately conveying the rich culture of their Deep East Oakland community.

After four weeks of team building, students not only evaluated their theme and different muralist, they ultimate also selected their artist, Marcos Lafarga. The impactful messaging and realistic portrayal of people in Marcos’s work spoke to students, and at the culmination of their internship, they entrusted him with carrying out their vision.

In the following weeks, BART will continue to work on this project, in consultation with the Y-PLAN, the artists, and the interns, even as they return to Skyline and Oakland High for the start of the 2017-18 school year.